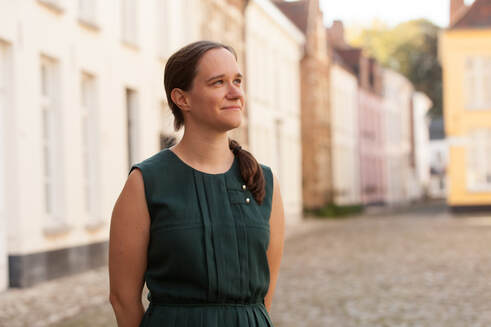 Pascale Van Os started studying piano at the age of nine at the Herenthout music academy. When she was 11 years old she started singing and at the age of 12 she started to play the violin.
In September 2005 she continued her piano studies at the Royal Conservatory of Antwerp with Levente Kende, Heidi Hendrickx and Nikolaas Kende and studied the violin as a secondary instrument at the conservatory with Dirk Verelst, Vegard Nilsen and Guido De Neve.
From September 2010 Pascale was admitted to the master's programme in choral conducting with Luc Anthonis and Geert Hendrix and the master's programme in orchestral conducting with Ivo Venkov and Koen Kessels at the Royal Conservatory in Antwerp. In 2013 she graduated with great distinction for choral conducting and in 2014 with distinction for orchestral conducting.

In 2021-22 Pascale Van Os was the Assistant Conductor for the Orchestre Philharmonique Royal de Liège (Gergely Madaras).  As a conductor she is associated with the Virago Symphonic Orchestra, the string orchestra Stringendo, Symphonic Orchestra Artemis, the mixed adult choir Caloroso, the OLV-choir, the Katarina choir.  In addition, she has worked with various other choirs and orchestras such as Kempens Symfonisch Orkest, the Ghent Singers, Chamber Choir Helicante, Jong Symfonisch Antwerpen,... and she has been selected by À Cœur Joie (Régionale de Bruxelles) to perform Verdi's Requiem in Bozar (Brussels) in 2022.
She conducted concerts abroad with the KLK Symphony Orchestra and Lviv Philharmonic (Ukraine), Rousse Philharmonic Orchestra (Bulgaria) Orchestre de Picardie,...

In December 2011 she won the conductor's competition organised by Klara and she conducted the Belgian Chamber Philharmonic, broadcast live on Klara.  With the Vocal Ensemble Caloroso she won the 2nd prize in the category chamber choir at the Llangollen International Musical Eisteddfod 2013 in Wales and the Prize of the Ministry of Culture at the Bydgoszcz Musical Impressions 2016 in Poland.  In November she received the Award Ernest van der Eycken as an upcoming conductor.  In December 2022 she was awarded with a honorable mention at the “VIENNA NEW YEAR’S CONCERT” International Music Competition 2022.